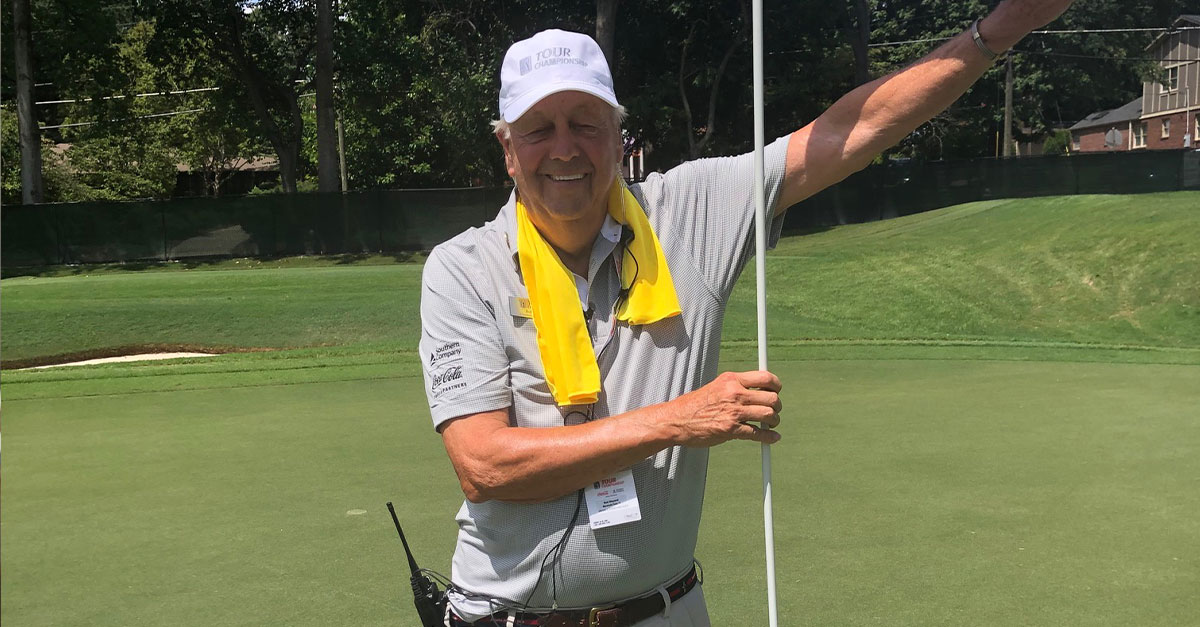 For veteran volunteer Bob Weyand, his home base at this lauded golf tournament is the Volunteer Headquarters, sponsored by Georgia Urology in partnership with Boston Scientific. As he helps the event machine function on the golf course, the most fulfilling aspects go way beyond the green.

When the top 30 professional golfers converge upon East Lake Golf Club on August 24-28 for the TOUR Championship, each has his eye on walking away with the FedExCup as the season-long champion.

It’s no easy feat, and neither is the coordination of such a high-profile sporting event. It takes a village for the TOUR Championship to come to life. Longtime volunteer Bob Weyand of Roswell, Georgia knows this well, like a caddy knows their way around a golf course. 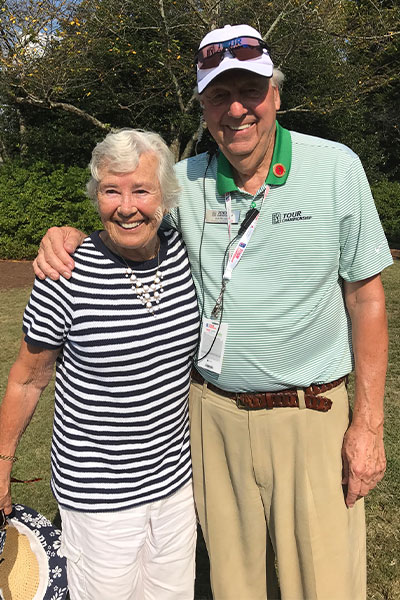 For the past 21 years, Weyand has volunteered at the TOUR Championship. A majority of that time he’s been the chairman of Hole #11, which means he’s in charge of supervising a crew that makes sure things run smoothly on that particular portion of the course. For example, if a noisy fan is distracting Jon Rahm as he tees off, it’s up to Weyand and company to silence the issue.

“The original intent to volunteer was to watch golf,” he says with a laugh. “As we found out from the people who trained us, we were really there for the safety of the patrons, the individuals who came to watch, and the players.”

Weyand’s 14-person team of volunteers consists of friends and former business associates of this retired manufacturer’s representative. Each morning of the tournament, his team gathers in the Volunteer Headquarters, an on-site home base, which is sponsored again this year by Georgia Urology and Boston Scientific. It’s where they check in, receive their radios, and equip themselves with water and sunscreen.

The Hole #11 chairman then doles out the assignments by splitting the team in two. One group spends half of their time on the tee, while the other stands guard at the green. At the round’s halfway mark, once 15 teams of golfers have gone through, Weyand switches the group locations so the volunteers have the opportunity to experience both aspects of the hole.

Their overall job is basically described as crowd or gallery control. In order to make sure the members of the gallery remain behind the ropes and keep quiet so they don’t disturb the golfers, the volunteers keep a keen eye on the crowd. This means they most often have their backs to the action.

“If you see volunteers with their hands up in the air watching golf, they aren’t doing what they’re supposed to do,” Weyand says. “I’ve probably only seen two or three putts on the green throughout my 21 years. And that’s only because during those putts, I was positioned in an area where I didn’t have a gallery behind me to worry about.”

Other responsibilities come with a bit more pressure. If the golfers don’t hit the ball in the fairway or on the green, the volunteers have to move the ropes, move the gallery, and make sure spectators know not to touch the ball. A volunteer then marks the ball so the player and caddy know its location. Once the player arrives, Weyand says it’s important to make sure and ask people to silently stand where they are while that golfer makes the next shot.

Depending on the golfer, this situation can become even more tense. Weyand recalls the time Tiger Woods hit a ball to the right of the green. This caused the volunteers to quickly scramble and make sure no one grabbed the ball and ran away with it.

Yet Weyand says helping the TOUR Championship function, while thrilling for a longtime golf fan, has more important aspects attached.

Weyand is a prostate cancer survivor. He says the fact Georgia Urology is sponsoring the Volunteer Headquarters could bring awareness to issues such as prostate cancer to the more than 1,300 volunteers gathering there during the tournament.

“As we age, it’s important we continue to keep our health status up to date and take as many proactive measures as we can,” he explains. “I hope Georgia Urology’s presence at the Volunteer Headquarters inspires others to do that.”

Georgia Urology’s sponsorship of the Volunteer Headquarters is a direct result of the philanthropic side of the event. The volunteer workforce allows the TOUR Championship the opportunity to put funds back into the East Lake community. According to Georgia Urology CEO Dan Fellner, it aligns with practice’s values and actions.

Since first being played at East Lake in 1998, the TOUR Championship has donated more than $42 million to local charities. This includes the East Lake Foundation, the First Tee of Metro Atlanta, Grove Park Foundation, Focused Community Strategies, and Purpose Built Schools Atlanta.

Weyand says the most fulfilling aspect of volunteering with the TOUR Championship is witnessing the transformation of the community surrounding East Lake Golf Club.

“Over the past 21 years, the overall change in East Lake has been incredible,” Weyand explains. “The funds have been used to really lift up that community. It’s a safer environment with some great schools. The donations have helped two or three generations complete their education and grow as individuals. It’s inspiring and really helps make volunteering worthwhile.”

Throughout his 21-year volunteer stint at the TOUR Championship, Bob Weyand has been present during some historic happenings on the course. Although his job is crowd control and he misses most of the action, he’s still managed to witness some memorable moments. From rubbing elbows with golf legends to experiencing a near-tragic storm, Weyand’s stories are many. Here are a few:

In 2018, while Weyand was volunteering on the 18th hole during the final round, he watched as Tiger Woods celebrated his 80th win on the PGA TOUR by securing the 2018 TOUR Championship.

For Weyand, the 2019 TOUR Championship resulted in several eventful moments. On one occasion, during the ceremonial tee shot made by Bob Jones IV, Bobby Jones’s grandson, Weyand retrieved the ball. When Weyand handed the golf ball back to Jones, Jones told Weyand that his son had made the wooden tee. In spite of Jones’s encouragement to keep the golf ball, Weyand informed Jones it would be a far more meaningful experience for him to know the golf ball he retrieved would be given to Bob Jones IV’s son.

On August 24, 2019, the second to last day of the TOUR Championship, a storm struck during the third round of the season-ending PGA TOUR event. As heavy rain fell and lightning lit up the sky, people sought shelter under trees. Suddenly, lightning struck a tree near the 16th hole. Six people were injured, and the event was suspended for 30 minutes. Weyand witnessed the tree shattering and catching fire.

Despite the storm, the 2019 TOUR Championship ended with another unforgettable experience for Weyand. While helping control the large crowds near the 18th hole, Weyand saw Rory McIlroy win his second FedExCup and receive a $15 million first-place check.